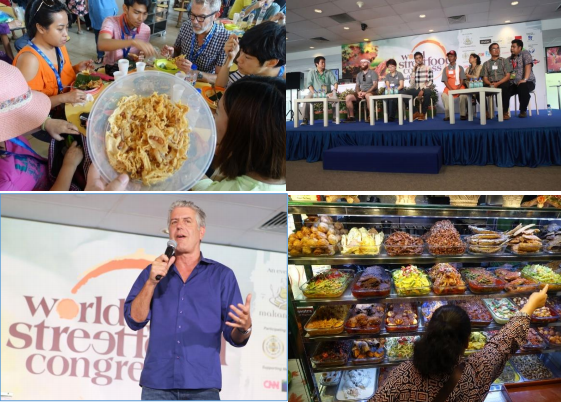 The third installation of the World Street Food Congress comes to Manila on April 20th at the Bonifacio Global City (BGC) in Metro Manila, Philippines, after two successful runs in Singapore (2013 and 2015).

The World Street Food Congress (WSFC) is a symposium, conference and a mega street feasting festival that celebrates and seeks opportunities and possibilities for the world’s most popular food culture – heritage and comfort street food.

Not just about comfort food and deliciousness, there will be an WSF Dialogue component that is about addressing issues of preservation, sustainability, relevance and the world of opportunities that can be created in the future.

“The world so needs a World Street Food Congress” Anthony Bourdain, food and travel TV host and author at WSFC13.

The world’s oldest and grandest street food culture arose from an era where opportunities were rare; folks trying their level best to make ends meet had to hawk their heritage and often ingenious recipes on the streets to eke out a living. Over the decades and centuries, these dishes have become iconic and beloved by the masses. The majority in such cities, rely on these comfort heritage street foods today and it has become a big part of the culinary culture of the land.

According to Makansutra, the Philippines, voted by CNN as one of the most exciting culinary cities to watch, has a dynamic food heritage inherited from its native flavors and the many world culinary concepts. It learnt and adapted from the visitors it had over centuries including Spain, China, Indonesia, America and even Japan.

Thus, sharing and experiencing the street food in the Philippines makes perfect sense. it is then no woner why this year, #WSFC2016 sails from Singapore to the Bonifacio Global City (BGC) in Metro Manila, Philippines, after two successful runs in the Lion City (2013 and 2015).

It will include cooking demonstrations of iconic dishes from various presenters including, Indonesia’s William Wongso, Woo Wai Leong, Asia’s first MasterChef winner and Singapore’s Malcolm Lee who will be featuring iconic Peranakan dishes that are rarely seen in the Philippines.

Tickets are available at www.wsfcongress.com from http://wsfcongress.com/ticket-pricingregistration/. Corporate bulk tickets and student discounts are available upon request. Rack rate tickets range from U$250.00 each and it includes tea breaks and lunch on both days, a PHP1200 Jamboree food voucher and a special WSFC16 gift pack for each participant.

There will be up to 24 hawkers from around the world, setting up their stalls and offering unique and iconic street food fare at the World Street Food Jamboree. It will feature street food stalls from

How To Make Pizza Like They Do In Italy

5 Catering Tips to Make Your Event A Success