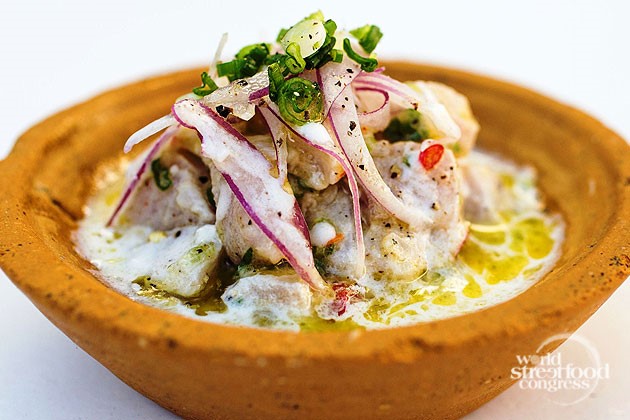 It is the ultimate dream of every foodie to be stranded in a one-stop shop of the most exquisite flavours of the world. The World Street Food has 24 stalls from 12 different cities that you can check within 24-hour time.

More than 80,000 curious and fearless foodies from around the globe and more than 200,000 meals were sold in 2013. In this 2nd edition, the World Street Food Congress held in Singapore featured Pepita’s Lechon, Bale Datung’s Sisig and Chef Paul Qui’s food truck which are proud Filipino brands.

The Filipino’s undying love for lechon (roast suckling pig) has been introduced in big leagues by Pepita’s Kitchen which is headed by Chef Dedet de la Fuente. This specialty dish is among the most famous street fare of Cebu that there is an annual festival called Paradang Lechon in its celebration. Awarded as the best dish in Asia at the 2014 Chowtzer Fast Feasts Awards in London, the white truffle oil paella-stuffed pork dish proves to be worthy of its glorious reputation – both local and international.

Chef Claude Tayag popularized the Sizzling Sisig when his family opened Trellis Restaurant in Quezon City during the 1980’s. This scrumptious Pampango specialty is basically the playful combination of unripe fruits dipped in vinegar and boiled meat seasoned with spices. When one opts for sticking to the traditional way, sisig must be cooked with pork ears, cheek and jowl and mixed with chicken liver, onions, calamansi and chili. This palatable version of the Sizzling Sisig was intricately served in satisfyingly crunchy fried wonton cups.

Recipient at the 2012 James Beard Foundation Award for Best Chef and winner of Top Chef Season 9, Chef Paul Qui, established East Side King with the help of Moto Utsunomiya in 2009. ESK is a group of Asian-inspired street food restaurants and food trucks based in Austin, Texas. His food truck offered a fusion of a dish commonly found in the Philippines to gratify the taste buds of Americans. Chicken Inasal, grilled chicken which is marinated in a mixture of lime, pepper and vinegar, is served in a taco with fried chicken skin. Kinilaw, Chef Paul’s signature raw seafood starter, is made with sweet and succulent snake-head fish, red onion, coconut vinegar and fragrant Japanese Yuzu and Thai chilies. This delicious combination is otherwise known as Filipino Ceviche, the featured image for this article.

After the much-awaited Madrid Fusion Manila has come to a successful conclusion, odds have been in the favour of the Philippines in elevating our country to gastronomic heights. If you missed to be a part of these extravagant culinary events, we are giving you a heads up. Let us keep our fingers crossed as the Philippines are reported to be the host of the 3rd World Street Food Congress next year.

ABOUT US
FoodFindsAsia.com is a collation of content to help grow your food business. If you're a foodie, you'll find tons of resources for you here, too. Should you want to contribute content, drop us an email.
Contact us: email@foodfindsasia.com
FOLLOW US
Copyright © Heartshaper Asia. All Rights Reserved 2016.
MORE STORIES
Events

DINE Philippines Gears Up For Baguio