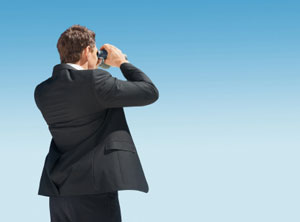 Last week, during a networking group discussion about the rise of robot workers, I was introduced to the seemingly innocuous but strangely portentous phrase ‘below the API’. It seems that, in this high-tech world, jobs are split into two classes: those above the API, and those below it. Above-the-API jobs are jobs related to writing software applications that perform tasks, and below-the-API jobs are the traditional, non-coding jobs that most workers in the world perform. This industrial tasking model, illustrated in Forbes, outlines how below-the-API jobs performed by human workers are essentially dead-end jobs that will eventually be replaced by automated processes and robots over the next 10-20 years.

While many of us can imagine how the modern production jobs of line workers and the like could be taken over by robots, it’s not quite as easy to imagine a robot sitting at a front desk in place of a receptionist or in an interview room in place of a recruiter.

This brings us to the subject of hiring. Can recruiters really be replaced by robots, and will the hiring process soon be automated? I am not going to sugarcoat this at all: in my opinion, it’s inevitable that the hiring process will become fully automated, although the pace at which this happens may vary according to job type, level, industry, and the stages of the hiring process.

As most of you know, applicant tracking systems have already automated away the resume sifting and short-listing processes, and I think it’s probably just a matter of time before all companies big and small move to this kind of model. We are just waiting for the next wave of innovative ATSs that will make it easier for small businesses to start using these systems. HR software systems made that leap a couple of years ago, and now it makes sense for businesses of any size to use them. What’s to stop ATSs from following suit?

Technology advances mean that ATSs will soon have the power to take even more control of the hiring process. ATSs and/or related software tools will soon be able to make sound selections of candidates, arguably even better than humans can. Just look at Xerox, which cut attrition rates for call center staff by a fifth in six months by turning over their selection decisions to what is essentially a hiring robot. The company did this by using big data analysis to create an ideal and quantifiable profile of the most successful performers and implementing a range of psychometric tests, mental games, and demographic data to score candidates. Candidates who were given a green light by the computer were hired, and those given a red light were not. Amber candidates were subject to human review. Hunch-based, human-based hiring is already being replaced by data-based, API-driven robotic hiring.

I firmly expect this form of hiring to become dominant at the lower levels of companies across the board. It may take more time and more sophistication before computers can soundly hire for C-suite roles and such, but nothing is safe. If computers and algorithms can make multimillion-dollar investment decisions, then it’s not too hard to believe that they may eventually be able to make multimillion-dollar CEO appointments as well.

What About Candidate Search?

I have to admit that, until recently, I couldn’t see how candidate search could be automated. However, I’ve realized that it’s fairly easy to do, when you think about it. ATSs already have the power to post and market jobs on jobs boards, and they can probably be easily programmed to run entire job-marketing campaigns via social media. This means it’s only a matter of time before an ATS can actually market a job and collect resumes.

I guess it’s not too hard for an API to connect with and approach candidates on LinkedIn, although I am not sure how candidates would respond to automated headhunters. But with the right incentives, I think they’d probably get used to it.

In conclusion, I think the tools are pretty much available today for an organization to automate the hiring process from job-posting to candidate selection. One could argue that companies like TaskRabbit , 99designs, and Uber are already doing just that: they are basically API-driven versions of Elance. People punch in their tasks, and the API selects and schedules workers to perform the job. There are no recruiters involved.

While it’s clear that hiring automation will start at the ground, picking the low-hanging fruit of entry-level, volume-intensive hiring assignments first, I expect that, at some point in the next 30 years, we will see the first algorithm-appointed CEO. At that point, we’ll be able to say that fully computer-automated recruiting has arrived.

Kazim Ladimeji is a Chartered Member of the Chartered Institute of Personnel and Development, and has been a practicing HR professional for 14 years. Kazim is the Director of The Career Cafe: a resource for start-ups, small business and job seekers.

Video Distribution Continues to rely on Satellite, despite the rise of OTT

ABOUT US
FoodFindsAsia.com is a collation of content to help grow your food business. If you're a foodie, you'll find tons of resources for you here, too. Should you want to contribute content, drop us an email.
Contact us: email@foodfindsasia.com
FOLLOW US
Copyright © Heartshaper Asia. All Rights Reserved 2016.
MORE STORIES
Tech & Trends

Michelin 2015 Guide to Best Restos in UK and Ireland

10 Restaurant Trends That Will Change Your Dining Habits In 2015

The Three Keys to Mastering Marketing in Today’s Noisy Marketplace