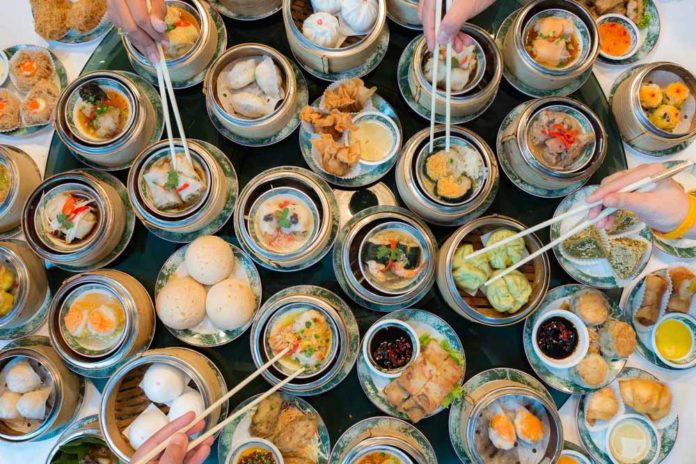 FoodFindsAsia.com | Why You Should Experience Hong Kong Cuisine While Traveling There | Hong Kong is one of the world’s most popular and in-demand tourist destinations. There’s just so much you can do in this quaint little territory. Shopping, the nightlife, theme parks, culture—and don’t forget a culinary adventure! Whether you’re one who’s up for street foods or the type who would instead go for a fancier set up, there’s just so much of Hong Kong’s cuisine that you can try.

Hong Kong isn’t labeled as the World’s Food Fair for nothing. When you’re in Hong Kong, here’s why you should make it a point to experience its cuisine:

One of the most common dishes ordered in Chinese take-aways is the sweet and sour pork—which is also one of Hong Kong’s most famous dishes. If you’ve loved your take-away versions, then surely you’re going to love the ones from Hong Kong even more, with their original and authentic flavors. There’s just something about that tangy, sweet, orange sauce that you can’t get enough of.

For starters, search for restaurants in Kowloon that have the best sweet and sour pork. Not only do you get to shop while you’re there, but you also have access to nothing but the best restaurants.

One thing you’re going to learn about the people of Hong Kong is that traditions are handed down from one generation to the next and are very well preserved. In Hong Kong, you’ll get to experience this by having a taste of their dim sum.

In other parts of the world, dim sum is served with a meal, often rice. But in Hong Kong’s tea houses, you’re served dim sum with tea. This is a practice that’s been done over centuries. Dim sum is usually created to be bite-sized and is always served with hot tea.

Apart from Hong Kong’s cuisine being incredibly delicious, they are also very healthy. Their dishes, particularly the soup and steamed variants, are recipes from older relatives who were very health-conscious. Their wontons, in particular, is a clear soup that’s infused with many natural herbs and vegetables. The texture of this dish may feel oily because of the deep-fried meat that’s included, but the herbs in the soup balance this out.

Where you’re from, eating goose might not be a staple. But in Cantonese tables, it is. Hong Kong has a lot of stalls and fancy restaurants that offer you roast goose. While this may not be for everybody, it’s a meal you should try at least once while you’re in Hong Kong.

Roast goose in Hong Kong is nothing like what you’d have anywhere else in the world—even if roast goose has made its way to restaurants in nearby Asian countries, and even the rest of the world. After all, it’s believed to be marinated in a secret blend of not just a handful but at least twenty spices. The goose is roasted in charcoal until it becomes golden brown.

If you’re traveling on a budget, you don’t have to worry about burning a hole through your pocket to have a decent meal. Eating street food has become quite a practice in Hong Kong. As they say, do as the locals do, and it’s in these tiny food stalls that you get to experience local Hong Kong at its finest.

Despite being on a budget, you can still enjoy a hearty and delicious meal in food stalls. While there, don’t forget to get your hands on fish balls. This is one of the most typical Hong Kong food meals that you can try. Sold by street vendors, this dates back to as early as the 1950s. It’s also one of the locals’ most favorite comfort dishes.

Hong Kong and Macau used to be colonies of Britain and Portugal, respectively, so while you’re there, expect to be welcomed by food options influenced by these two European countries.

Egg tarts were first created in a monastery in Lisbon, Portugal, and were adopted in Guangzhou, China, then in Macau and Hong Kong during the colonial period. It’s a mix of egg yolk with creamy custard in a pastry dough. Especially when hot, it’s a dessert that will literally have your mouth watering well enough.

If you can’t go to Portugal right now for its local version, then do make sure to give it a try while in Hong Kong.

More than anything else, Hong Kong is mostly famous for its food. When you visit, trying out Hong Kong cuisine is a must so get ready to eat your heart out and go on a gastronomic adventure like no other. This is an experience you should never miss out on.

Delicious Desserts you can have on your Wedding Menu!

Sweet and Fit Stevia: Baking with Stevia and Fruits

When Is Salmon a Junk Food?

Four Foods that Truly Deserve the Title of Super Food