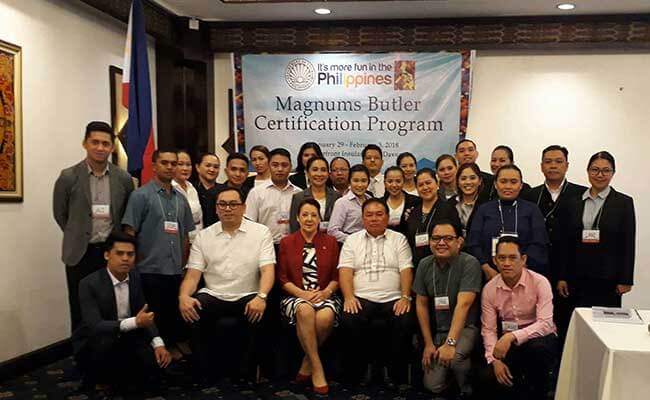 Waterfront Insular Hotel Davao, an accommodation known for its first-rate service and its warm and hospitable staff, recently hosted a five-day intensive course on Luxury 7-star Hotel Butler Service from January 29 to February 2. The training was initiated by the Department of Tourism (DOT) Davao Region office to bring hotel services in Davao to international standards and a level of exceptional quality.

The training program kicked off with a pre-course orientation with former DOT-Davao director Roberto Alabado III. Waterfront Insular Hotel Davao hotel manager Bryan Lasala was on hand to welcome participants. Lasala, who had previously taken the course early in his professional career, stressed the importance of the program. He said, “The course equips one with the art of discretion, diplomacy and detail; and the ability to take gentle care of guests from arrival to departure. It teaches hotel workersthe ability to display essential empathy to guests, engaging and providing them an unforgettable experience of a lifetime.”

DOT earlier granted Waterfront Insular Hotel Davao the privilege of having the hotel-resort’s team undergo the certification program by Magnums Butler Academy Josephine Ive, a renowned expert in the world of luxury service. MBA Australia is globally recognized for its expertise in training butlers to impeccable standards. The academy follows an exclusive accreditation system where students are assessed and granted ‘lapel pins’ of recognition—black for Passers with Credit (75 percent mark), silver for Passers with Merit (83 percent mark) and gold for Passers with Distinction (93 percent mark).

Lasala, a gold pin-bearer for passing with distinction, is, in fact, the first certified butler of MBA standards in the Philippines way back 2006. He adds that “one has to be passionate enough to keep the same level of service standards over time.”

How to use Apple Cider Vinegar in 22 Ways