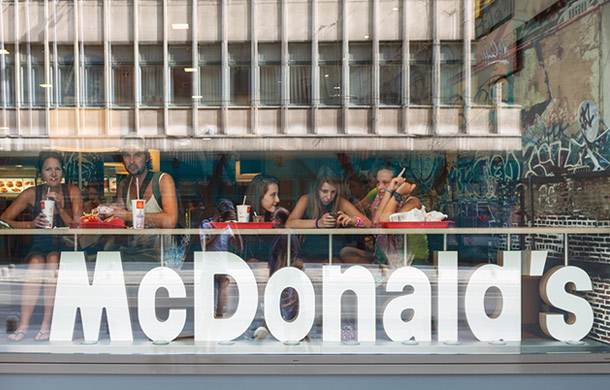 by Carol Tice, via Forbes |

Restaurant wait times are a tricky thing. If we think the wait’s too long, we leave. Or we grumble along this time, but then we don’t come back.

Which is why what matters isn’t how long the wait is, but how long we think it is. So that’s what digital branding and social marketing firm Digital Coco measured in its recently released Speed of Servicereport. The firm keeps a Restaurant Social Media Index that analyzes social-media mentions about the top 250 brands.

There are several reasons why fast food is getting slower. As chains have diversified beyond simple burger-and-fries menus, it’s difficult to crank out orders as quickly. We also eat out more often now, which leads to longer lines. Savvy chains are battling back with advanced restaurant technology, training, and careful changes to kitchen layouts.

Slow service is also a growing problem for brands, because of social media. Digital diners like nothing better than to vent about bad service online — the study found there were 11.6 million comments about speed of service made on social media in the first half of this year alone. Our top service gripes are rude staff, order mistakes, and tech glitches, in that order.

Where can you still get fast eats? Based on what diners say about brands on social media, here are the rankings:

Were you surprised to see two sit-down restaurant chains appear in the top ten? Remember, diners’ tolerance for waits at family restaurants are longer than when we’re standing around a fast-food order counter, or idling in our cars at the drive-through.

The survey found we’d like our order in 90 seconds at a fast-food place, in 4 minutes at a fast-casual spot like Chipotle, and in 12 minutes at a casual dining restaurant such as Applebee’s. We’re willing to wait 30 minutes for our order at a fine-dining eatery before we get annoyed.

Thirty minutes is also the maximum time diners said they’d wait to be seated at a fine-dining restaurant — longer than that, and patrons drive away.

Finding the Best Golf Apparel to Suit Your Style

Puncak Have Sweeping Views of Mountain and River

Marcus Wareing Reveals How to Succeed as a Chef