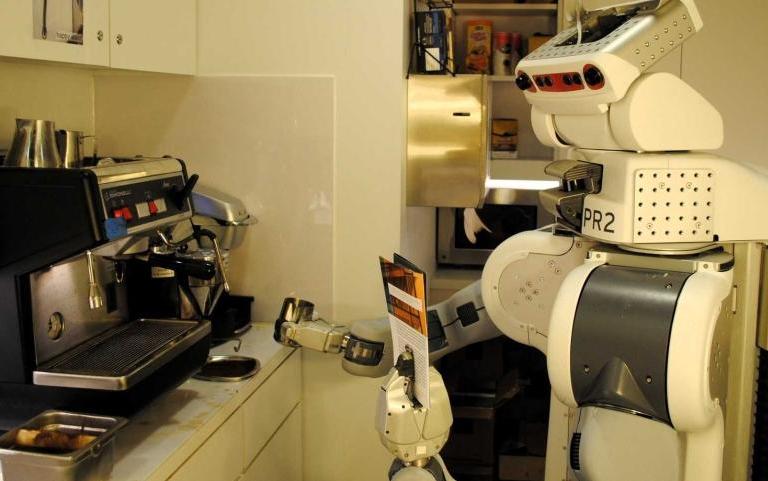 The PR2 robot of Cornell University is able to follow a set of instructions to use an espresso machine in autonomously making a cup of latte.

From an affogatto coffee, which is made by pouring hot coffee over ice cream, to latte, which is a little bit complicated with the added steamed milk, the Willow Garage-designed research robot has increased its skillset. The Cornell University team taught it to follow spoken verbal commands which was collected from crowd-sourced information with a bit of help from Internet volunteers to teach the robot how to use objects it has never seen before. Based on this object recognition skill which allowed Robobarista to deduce the actions it needed to perform, it was able to operate an espresso machine on its own.

Think of it like this: you know what a microwave is and you have probably seen dozens of microwaves in your life. When confronted with a new model that you have never seen before, you still know that setting the number of seconds and/or minutes and pressing the start button initiate the microwave to work. This is because you recognize a general set of objects as “microwaves” and can conclude based on its function how to use it. On the other hand, robots are not intuitive, but driven by pure logic and need to be comprehensively taught.

However, teaching a robot about the range of objects vast enough to be able to function with intuition requires very intensive labor – hence the crowd-sourcing which allowed humans from around the world to log into a website to help catalogue objects for the PR2’s database. It was this collection of information that allowed the PR2 robot to operate an espresso machine it had never seen before – by transferring the data it knew about similar object parts into its database. More than this, it was able to use an English language instruction manual.

So the basic instruction, “Push down on the handle to add hot water.” told the robot it must locate and identify a handle on the unfamiliar espresso machine which it accomplished to do, base on its knowledge of a urinal handle that is pushed down on a similar trajectory. By drawing on its database in this manner, Robobarista extrapolated how to us the machine and successfully made a latte all by itself.

The team is still working on crowd-sourcing to educate their robot, and you can sign up on the Robobarista website to aid in their efforts. Eventually, the research will be included in Cornell’s Robo-Brain project which is also currently, crowd-sourcing the education of a robotic memory bank.

Improving the Online Presence of Your Business

ABOUT US
FoodFindsAsia.com is a collation of content to help grow your food business. If you're a foodie, you'll find tons of resources for you here, too. Should you want to contribute content, drop us an email.
Contact us: email@foodfindsasia.com
FOLLOW US
Copyright © Heartshaper Asia. All Rights Reserved 2016.
MORE STORIES
Gadgets