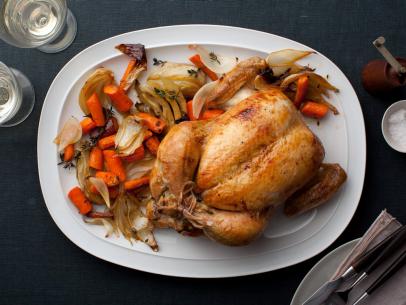 Ina Garten shared her Perfect Roast Chicken recipe in her show “The Barefoost Contessa” at the Food Network channel.

Preparation time is 20 minutes while cooking time is 1 hour 30 minutes. Let’s go through the ingredients and directions…

Preheat the oven to 425 degrees F.

From The Barefoot Contessa Cookbook

In 1978, Ina Garten found herself working in the White House on nuclear energy policy and thinking, “There’s got to be more to life than this!” She saw an ad for a small food store for sale in a place she’d never been: the Hamptons at the end of Long Island. She and her husband drove up to investigate and made the owner an offer on the spot. Two months later she found herself the owner of Barefoot Contessa, a 400-sq. ft. specialty food store.

Twenty years later, Barefoot Contessa grew to a 3,000-square-foot food emporium where twenty cooks and bakers prepared the food. Twenty-five more employees worked in the store helping thousands of customers to choose breads, salads, dinners and baked goods to take home. In 1996, Ina sold the store to her employees. In 2003, the new owners of Barefoot Contessa decided to close their doors and go on to new adventures.

In 2006, Ina and her business partner Frank Newbold started a successful line of Barefoot Contessa Pantry products, comprised of baking mixes and sauces developed from recipes in her cookbooks.

Ina has been a columnist for Martha Stewart Living magazine, O, the Oprah magazine and House Beautiful magazine.

Ina lives in East Hampton, N.Y., and Southport, Conn., with her husband Jeffrey, who is a professor at the Yale School of Management.