Home About Chef Zhe Never Too Late to be a Fast-Rising Culinary Star: Chef Zhe Jacinto 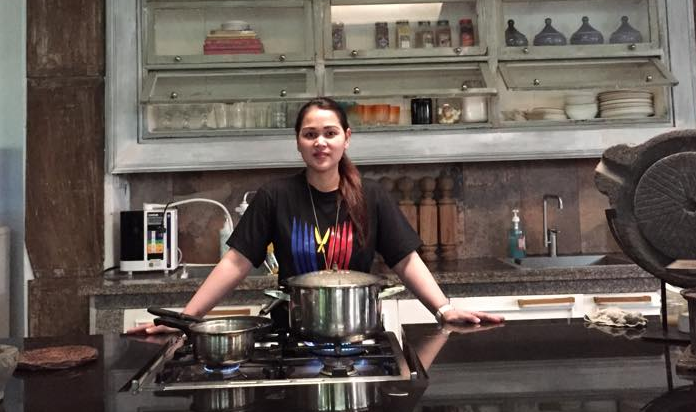 Chef Zhe Jacinto is UNTV’s resident chef for the daily program Rise & Shine, aired Monday to Friday, from 8 to 9 in the morning. She has been doing her stint for almost two years already and never seems to run out of new things to concoct. In fact, she is planning to publish a Cook Book to feature more than 200 of her recipes.

A graduate of the famous CCA (Philippines), Zhe, as she is known to friends, surprisingly, started as a housewife before she jumped into being a culinary student in 2001. She said she was bored then and needed something else to do. After finishing her culinary course, Chef Zhe found herself being invited to events. She realized her new skill brought her to fun places and it became evident that this is what she loves to do.

Born with cooking greatness in her blood, Chef Zhe’s grandmother was famous for her “Ube Halaya” and was always invited to cook for big events in their hometown. This, she says, was her realization that cooking makes people happy and she wants to make this her advocacy. As administrator of the Culinary of Filipino Chefs Society (CFCS), she is on the right track. Recently, Chef Zhe has been chosen — with Chef Myke “Tatung” Sarthou — to represent Greenpeace for the anti-GMO campaign.

Chef Zhe Jacinto is a fast-rising star in the culinary field in the Philippines and proves that it is never to late to be one and pursue what you love most.

Checkout some of Chef Zhe’s recipes (from Rise & Shine).

ABOUT US
FoodFindsAsia.com is a collation of content to help grow your food business. If you're a foodie, you'll find tons of resources for you here, too. Should you want to contribute content, drop us an email.
Contact us: email@foodfindsasia.com
FOLLOW US
Copyright © Heartshaper Asia. All Rights Reserved 2016.