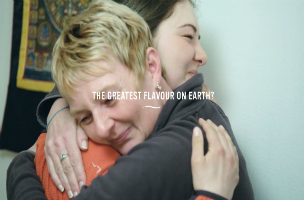 Anywhere in the world, even outside of the Philippines, mom’s cooking proves to be the greatest taste on earth – taste of home. Food is an integral part of each Filipino’s life – and any Filipino you ask will have a personal story on his or her mom’s cooking. This is not just unique to Filipinos alone. Just like in the video, mom’s-cooking binds family members together. No matter the distance, you can surely count on mom’s cooking to bring back happy memories of the family. It brings comfort which takes one back to great, meaningful childhood memories

Knorr explores the power of flavour in its new short film, ‘Flavour of Home’, launching today. According to research[1], for many, the flavour of certain foods has the ability to transport people back to the comfort of home and the meaningful moments in their lives.

Knorr’s ‘Flavour of Home’ film tells the story of a mother’s journey across the Arctic to surprise her daughter, Carmen, with a homemade meal cooked just like when Carmen was a child. Culminating in a touching moment, it reveals that the greatest flavour on earth is the taste of home.

Jon Affleck, Knorr’s Global Brand Director says: “We believe life should be full of flavour, and what better flavour to celebrate than the taste of home. We were keen to capture a true and authentic story that brings to life how flavour is so much more than just taste; it’s about emotion.”

The sentiment in the film is substantiated by new research commissioned by Knorr.  It found that people, regardless of how much time has passed, still find their mother’s cooking to be one of the greatest flavours on earth. In fact, three quarters (75%) agree that just one mouthful of their mum’s home cooking is enough to bring happy memories from childhood[2].  Around the world, 82 per cent of people say that the taste of some foods remind them of childhood[3] while more than three quarters of people (77%) agree that food is always a part of life’s most meaningful moments[4]

Shot by Oscar nominated documentary director Nanette Burstein, of Hungryman, the spot tells the story of a mother sending a home cooked meal to her daughter, who takes care of Huskeys in arctic Finland. The spot opens with the daughter describing her passion for her work, but also what she misses about home, specifically her mother’s home cooked meals. So the mother travels to Finland to bring her daughter a home cooked meal. When she tries the meal she feels like she’s “back at home again,” even though she’s hundreds of miles away. But when the mother makes an appearance is when things really get emotional. Susceptible parties might want to have the tissues on hand.

“We believe life should be full of flavour, and what better flavour to celebrate than the taste of home,” said Jon Affleck, global brand director at Knorr, in a statement. “We were keen to capture a true and authentic story that brings to life how flavour is so much more than just taste; it’s about emotion.”

Survive and Win the Restaurant War