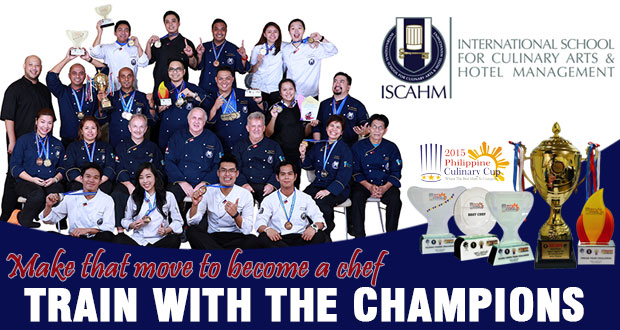 The champs did walk the talk as the International School of Culinary Arts bagged over-all championship at the Philippine Culinary Cup 2015 held last August 5-8, 2015.

Eat your hearts out as ISCAHM won 22 overwhelming awards across 18 categories with 5 bronze, 6 silver, 5 gold and 6 highest gold medals, including 5 trophies.

Get a full glimpse of ISCAHM’s overwhelming record during the Philippine Culinary Cup 2015:

The Philippine Culinary Cup has become the most prestigious culinary competition in the Philippines having established the highest standards in competition guidelines, utilizing only WACS (World Association of Chefs Societies) accredited judges (both local and foreign).

PCC takes on a big role in providing the Filipino chefs an internationally-recognized platform to hone their skills and showcase their talents in the culinary field. Winning a competition like this, ISCAHM proved worth of its tagline, “Train with the Champions”.

Why not become one today?

Check out their website at www.iscahm.com for more information or you may visit them on their respective branches: