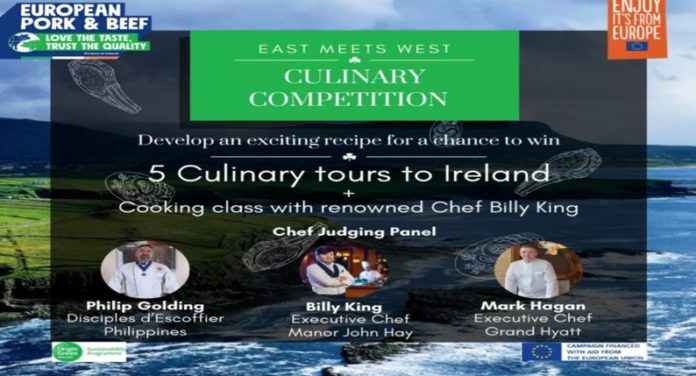 A group of internationally awarded chefs, as well as representatives from Bord Bia will review all the entries in early September.  The ten shortlisted entrants judged to be the best Filipino/fusion recipes will be announced by 7th September. Those shortlisted will be asked to submit a video of their dishes, using both the pork and beef cuts from Ireland. The final selection of the winning recipes will be done in October with the announcement of the five winners.

The five winners will win an exceptional culinary tour to Ireland, planned for 2021. This trip will give the winners a once in a lifetime chance to visit Irish food producers and top restaurants in Ireland to get a first-hand feel for the quality of the Irish produce. All five winners will also get the opportunity to attend a cooking class with renowned chef, Billy King plus other prizes.

The “East Meets West” competition will have a special participation of the legendary Irish chef in the Philippines, Chef Billy King. As one of the jury members Chef Billy, who first came to Manila in 1986 as Executive chef of InterCon hotel, became one of the pioneering chefs who brought in fine dining and international cuisine in the Philippines starting with the opening of Le Soufflé in 1990s. He is currently Executive Chef/Owner of Le Chef at Manor Hotel in Baguio City.  Joining Chef Billy is another international Irish chef from Dublin, Chef Mark Hagan. Chef Mark is the Executive Chef of The Grand Hyatt Manila in Bonifacio Global City. The third panel judge is Chef Philip Golding.  Philip is the Founding Chairman and President of Disciples Escoffier International Asia – Philippine Delegation, the Founding Chairman and President of World Master Chefs Society – Philippine Delegation and the Founding Member of American Culinary Foundation (ACF) – Philippine Chapter.

For more details of the European Pork and Beef Campaign in the Philippines, a campaign financed with aid from the European Union, Visit https://europeanporkbeef.com/ph. Please visit our Facebook page: https://www.facebook.com/EUPorkandBeefPH/

Nantucket Dishes that You Have to Try While on Vacation

How to Bake with Sweet and Fit Stevia Instead of Sugar