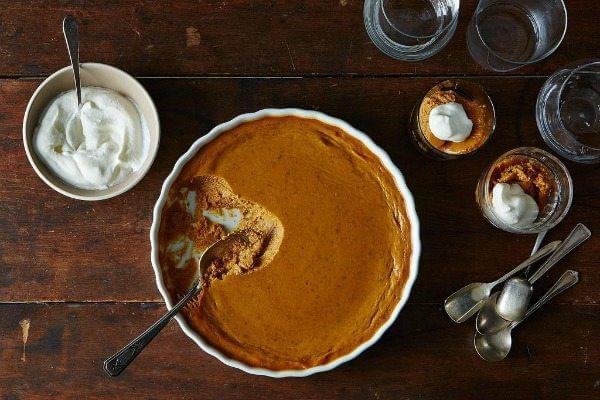 For those unfamiliar with pumpkin pies, converting this humble vegetable into a lip-smacking dessert can sound challenging. Majority of us relate pumpkins with roast dinners and soups especially when you crave for something comforting. Associated with Thanksgiving, this treat is a holiday staple.

Instead of resorting to readymade jars of the spice mix specially created for pumpkin pies, make your own from scratch. Combining freshly grated nutmeg, cloves, cinnamon, ginger, and allspice will give you a heavenly concoction.

These intoxicating flavours when added to your filling simply elevate the level of deliciousness. Keep tasting as you go along to achieve the perfect balance of spices. Remember, you can always add more later so start with a smaller dose of the spice mix.

Making your own pie crust is immensely satisfying and this beats the ones available in the market, hands down. The secret to making a flaky crust is to chill it at every stage. Begin by chilling the ingredients including the flour required to make the dough. Subsequently, chill the prepared dough and thereafter the discs rolled out from the dough to line the baking tin.

A pinch of salt, when whisked with one egg, makes for a good egg wash. For a nice golden sheen on your pie crust, lightly brush it with this egg mix. To avoid your crust getting soggy once the pie filling is poured in, blind bake the empty shell in a pre heated oven.

Instead of using all pumpkin, substitute a third of it with sweet potato, butternut squash or candied yams. This result in sweeter flavours and the best pumpkin pie recipe Australia. For a concentrated puree, roast your vegetables first. Roasting reduces the water content in the veggies and brings out their natural sweetness.

Though making your own puree is time consuming, the end result is worth the effort made. For a slight caramel flavour, incorporate half brown and half white sugar while making the filling. Always strain your filling once combined for a smoother and creamier texture.

One of the golden rules of baking is preheat your oven prior to placing your dish in to bake. Preheating ensures the pumpkin pie is evenly cooked including the crust which should be nice and flaky.

To avoid any cracks developing on the top of your pie, pull it out of the oven when just set. Over baking your pie leads to cracks appearing. As the pie cools outside the oven, it completely sets.

Pumpkin pie while still warm served with a dollop of freshly whipped cream is a magical combination. Sweeten your cream with a little sugar while whipping it till medium peaks form.

Better to opt for homemade whipped cream rather than store bought ones. The latter contain added preservatives which are best avoided. For an added punch, spice up your whipped cream. Combine it with a dash of ground cinnamon and a pinch of grated nutmeg.

This classic dessert is also sometimes creatively reproduced in various forms. These include dips, milkshakes, tarts, petite pumpkin pies, crumb bars, mini pie bites, wontons, and even pumpkin pie fries. This gives you a peek into the versatility of this iconic delicacy.

The traditional pumpkin pie however is made the most often during fall which is also commonly referred to as autumn. Have your fill of pumpkins during the holiday season when this vegetable is plenty. Go ahead and indulge your sweet tooth to the hilt.

Mike Haynes is a designer,food blogger and entrepreneur. When not designing or blogging up a storm,he’s out in the garden teaching himself about permaculture and self-sustainability.Likes food. And cooking it.

How to Cook with Sweet and Fit Stevia

Kaffe Caffe: A thesis to reality

Comfort food to a good life