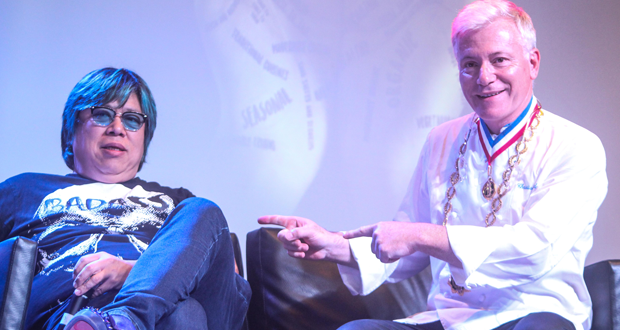 Filipino restaurateurs, culinary purveyors, and world-renowned Michelin-star chefs gathered together for the “Future of Food” conference last November 23 at the University of the Philippines’ new campus in Bonifacio Global City. The momentous event was hosted by CCA, Manila and was part of the premier culinary school’s 20th year anniversary celebration.

The powerhouse line-up of speakers shared emerging trends that are shaping the culinary and hospitality industry, valuable insights on critical issues and the role of chefs in the fast-paced and technology-driven world.

The internet has changed the way people cook and eat. “Historically, recipes get handed down from one generation to the next but many Gen Xers and Yers were skipped,” said Eileen Borromeo, Planning Director of McCann Worldgroup Philippines. “Children are now digital natives who are Youtube-taught rather than mom-taught. There are a hundred and one reasons why children are not allowed in the kitchen but that is slowly changing.”

Another point Borromeo touched on was the rise of dining collectives and pop-ups such as Mercato Centrale and start-ups like Plato PH, an online platform that enables chefs to connect and serve customers in their own homes. “These channels can be used to pilot an idea and eliminate the need to shell out a big investment,” she described. More opportunities meant more industry players and the need to stand out from the rest has resulted to bolder interpretations of traditional Filipino cuisine.

“I’ve been coming to the Philippines for the last 20 years and the whole of Manila has grown. Everyone’s enjoying the variety,” said Chef Alvin Leung, the man behind 3 Michelin-starred Bo Innovation in Hong Kong. The chef, known for his style dubbed X-treme Chinese Cuisine, talked about bringing traditional techniques into the now. “As a chef, you want to create a modern dish that will eventually become traditional. If you do that, you would have done well,” he said.

Filipino food and culture on the global stage

Outside of Manila, culinarians like Nicole Ponseca are championing Filipino food through her restaurants, Maharlika Filipino Moderno and Jeepney Filipino Gastropub both found in New York City. 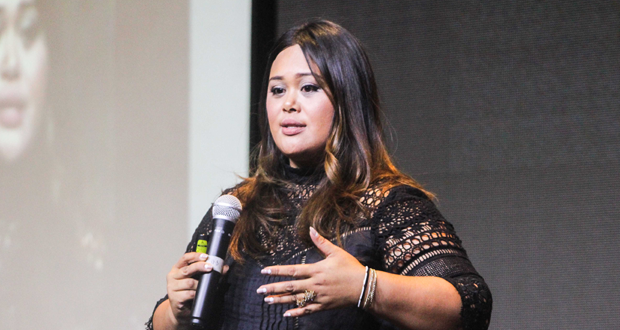 Ponseca started her inspiring talk with an illustration of New York back in 1998, a time when the only Filipino restaurants were mostly located in Queens and limited to small mom-and-pop places that served expats and the first wave of immigrants. This lack of representation for Filipino cuisine is what emboldened her to venture into the industry. “I was an ad executive by day and dishwasher, host and server at night for 12 years so I could learn the craft,” she narrated.

She attributes her success to one thing: owning who she was as a Filipino. She went against what was popular and went back to what was authentic. She recalled the times her dad would eat with his hands and this served as her inspiration for the immensely popular Kamayan Night at Jeepney. “Respect that we have our own mother sauces. There’s no room to water down patis, bagoong, and salted egg. That’s exactly what has kept us behind,” Ponseca emphasized. Maharlika has been dubbed as one of the greatest restaurants around the world by Conde Nast Traveler.

Taking it further than food is The Filipino Kitchen, a community of Filipino-Americans who organizes the Kultura Festival in Chicago. The carefully curated festival aims to highlight the best in Filipino-American food and arts to appeal to those who personally identify with Filipino culture and also to the merely curious. Modern interpretations of traditional cuisine serve as the highlight of the festival, which included dishes like Kare-Kare meat pie, chilled pancit salad, kinilaw tacos, duck confit adobo rice bowl, and the much-talked-about Cristal Ube Golden Donut by Chef Bjorn Delacruz.

“We want to make Filipino food accessible by combining it with elements that are familiar to everyone,” said Natalia Roxas, co-founder of The Filipino Kitchen. The unique culinary creations were complemented with cultural workshops on batok (traditional hand-tap tattooing), baybayin, and martial arts. “Pushing Filipino food to the global stage does not just entail one aspect – it involves our whole culture,” Roxas said.

The most pressing issue addressed during the conference is the subject of sustainability and how it can be achieved in the kitchen and beyond.

Michelin-star chef Christian Tetedoie reminded the chefs in the audience about the importance of waste management and encouraged everyone to change the way we consume food. “Excessive consumerism leads to huge amounts of leftovers. We need to eat better and not more and opt for good quality and presentation over quantity,” he said.

Sourcing ingredients is another key aspect to achieving sustainability. Part of respecting and conserving fresh ingredients are using only what’s in season to achieve the best taste, maximize health benefits, and keep costs low. Chef Tetedoie illustrated this aspect using one of his original dishes – lobster and veal head braised in carrot juice – which he recreates every season according to what’s available on the market.

Consuming local ingredients is a simple yet radical way of preserving them. “If you want to preserve something, you have to eat it because when you eat it, you give it commercial value and keep the farmers in business,” said restaurateur and author Amy Besa. When she started sourcing ingredients for her restaurant Purple Yam in Malate, she looked for the unknown, ignored and undervalued, an approach she hopes other restaurateurs and chefs will follow. She shared her experience of foraging in the Batulao Forest in Nasugbu, Batangas, one of the last natural stands in the Philippines that’s abundant in indigenous herbs and fruits like tibig (local dates), wild passion fruit, and wood sorrel.

“We are influencers and we must use that in a positive way,” said Spanish chef Chele Gonzales of Gallery Vask, an art space and restaurant in Bonifacio Global City considered as one of the best restaurants in Asia. “At Vask, we use 95% locally sourced ingredients while our seafood is 100% local and responsibly caught,” said Chef Gonzales who has worked at no less than legendary El Bulli and El Cellar de Can Roca before settling in Manila

Social entrepreneur and author Chit Juan shares in the stand for preserving indigenous ingredients through an organization called Slow Food, a global movement that aims to prevent the disappearance of local food cultures and traditions by promoting heirloom species, varieties and preserving biodiversity. Slow food is not a method of cooking over slow fire but refers to good, clean and fair food. “We want to fix the broken food system because the farmer gets the least and the consumer gets the worst,” Juan said.

Chef Gonzales also stressed the preservation of the country’s marine life. “Seafood is a luxury and we must not take it for granted.” More than using high-quality ingredients, it is the chef’s role to ensure that these ingredients, particularly seafood, were obtained through eco-friendly methods.

The role of the chef

What is the future of food? It lies not just within the kitchen but outside of it as well. Chef Chele Gonzales sums it up: “As chefs, we cannot be inside four walls all the time. We need to go out and get in touch with nature, with traditions and culture. I travel around the Philippines because the most important thing for me is knowledge.”

How to Make (and Enjoy) a Backyard Boodle Fight