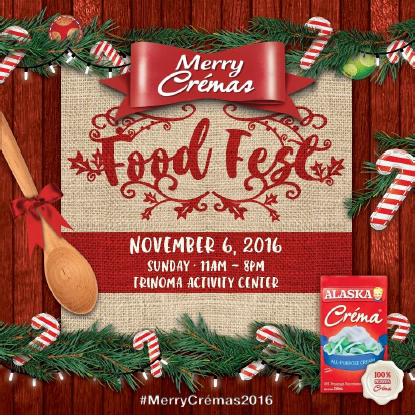 If there’s one thing that best highlights the joys and abundance of the Christmas season, it’s the many feasts and gatherings that bring Filipino families and friends together. Aside from the happy memories, the catching-up and the bonding opportunity, it’s the sumptuous dishes coming out of the kitchen and even the take-out box that is truly the centerpiece of every Christmas gathering.

The Yuletide Season also marks the opening of many food fairs and bazaars where up and coming food merchants take center stage and get the opportunity to showcase their delicious food products to foodies and the public. Bazaars provide the chance for upcoming names to reach out to a bigger slice of the market at a more convenient setting due to its strategic location, high market traffic and the word-of-mouth advertising it usually brings.

This year’s Alaska Merry Crémas Food Fest, to be held on Sunday, November 6, from 11AM to 8PM at the Trinoma Activity Center in Quezon City proves to be another exciting gathering of more than 30 food concessionaires all geared up to showcase their various food specialties to the public. While the food on display is a mix of sweet and savory dishes, there’s one thing that makes it both delicious and delectable and that is the Alaska Crema All-Purpose Cream.

On it’s fourth staging, start-ups and established businesses operating out of their home kitchens relish the opportunity of being able to showcase their specialty dishes, while also having the chance to gain more patrons, thanks to the exposure being offered by the event.

Here are some of the food merchants who’ll be joining the food fest:

Baking has always been a passion for Joseph Sanvictores, a young chef who is living the dream of starting his own bakery, Chef Jon’s,  following a quick detour with food.   Already an established chef with multiple food businesses under his name, Chef Joseph started offering cakes and other pastries out of his home kitchen two months ago. As a baker, he credits Alaska Crema for giving his cakes its distinct taste,.

What I like about Alaska Crema is that its a cream that’s not too overpowering in sweetness; it has that balanced taste that works well for my cakes.

Since the bakery is still in its infancy, Chef Joseph appreciates the fact that Alaska Crema gives bakers like him value for money — especially since baking is a business that relies heavily on the use of creams. By joining this year’s Alaska Merry Crémas Food Fest, he hopes to reach out to a bigger market, with more people having the opportunity to get to know more of his products. Chef Joseph will showcase up to four variants of cake on display, including his best-seller, dubbed the Birthday Cake.

Barbecues are a truly distinct Pinoy staple food, hence making them a dime-a-dozen. Southern Barbecue, a business by long-time friends Anna Tugas and Marsie La Sangre hopes to make that difference by offering their barbecues with a side of Alaska Crema. If this sounds implausible, then all the more that the public should try it.

The two long-time friends have food businesses of their own when they decided to collaborate on a shared food business. After deciding to offer barbecues (“because they’re easy to make,” says Anna), the two were able to open a physical store in their BF Homes neighborhood. Since barbecue has always been a common viand, the two decided to put an edge and a spin to the staple meal by offering it with a side of garlic sauce, made out of Alaska Crema.

Marsie believes that joining Alaska Merry Crémas Food Fest serves as a good marketing tool to their business, on top of having a physical store. The association to the Alaska Créma brand also provides them with the edge and the exposure that will definitely benefit Southern Barbecue.

Batter Up: Sweet brownies and cookies you can’t help but nibble on (by Florence Bayer)

Florence Bayer discovered her love of baking when she was still barely out of high school, following a serendipitous turn at the school oven during a home economics class.  Bayer began offering the baked goodies for sale, buoyed by the success of her signature brownies that turned out to be a hit even among her mom’s friends. This was more than ten years ago, and the love for baking resulted to Batter Up, Bayer’s successful home bakery business.

Bayer is back for the second time for this year’s Merry Crémas, and definitely more excited than ever to showcase more than seven variants of her baked goods. Taking center stage is her signature brownies, which counts Alaska Crema as one of its ingredients.

I started using Alaska Crema by accident. I had to improvise because I was missing a yogurt so I decided to use Alaska Crema with lemon instead. That made all the difference and had led me to create something that is well-loved by everyone.

By joining Alaska Merry Crémas Food Fest 2016, Bayer is looking forward to having an entirely different market to cater to, plus gaining the exposure, which is very important, especially for a young baker like her.

Have a taste of what these three food merchants can offer, while also getting the chance to enjoy other sumptuous dishes and sweet delights when you visit this year’s Alaska Merry Crémas Food Fest at Trinoma. Who knows? You might just have met the next food superstar or tasted the next in-demand dish that day.

For more information about the event, visit our social media accounts – FB: @AlaskaCremaMoments or IG: @alaskacrema. Interact with us, use the hashtag #MerryCrémas2016!

Spoil Yourself with Sweets and Brews at Marco Polo Ortigas Manila’s...