Evian Natural Spring Water has unveiled its new look this month of June during various mall activation events in Metro Manila. This is the first time in more than a decade that Evian has redesigned its bottle since 1999.

The first thing you’ll notice with the redesigned bottle is its sleeker look. Compared to the previous bottles, the new one has cleaner lines that makes it different from other bottled mineral waters in the market.

If you’ll look closely, you’ll notice that it’s “label-less“. According to PackagingDigest.com, this transparency symbolizes a celebration of its contents. Evian Natural Spring Water is known as a distinctly pure water, as nature intended.

The front features of the redesigned bottle is simplified and has sophisticated tweaked its previous logo design. As seen from the front, a panorama of mountains (printed at the back) celebrates the water’s source in a corner of the French Alps, a region protected by the farming community to ensure Evian water maintains its pure, natural form.

“We’re very excited,” says Eric O’Toole, president of Danone Waters of North America. “Our new bottle allows Evian’s honest and natural personality to make a new connection with consumers. Evian has been the icon of the category for three decades, yet its vibe and skin had become dated. We wanted to remake the brand so consumers would be proud to once again call it their favorite water. It’s a sharp new look, and we can’t wait to see it here, there, and everywhere.”

To celebrate the new look of Evian here in Philippines, Evian has also launched the Evian.Spa promo. Check out the image below for mechanics: 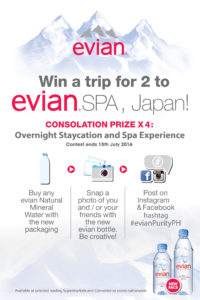 How to Market Your Restaurant During the COVID-19 Crisis

The Essential Things to Know About Buying Alcohol in Dubai

You have successfully subscribed to the newsletter

There was an error while trying to send your request. Please try again.