Home Food Eat Like a Roman at Mamma Mia 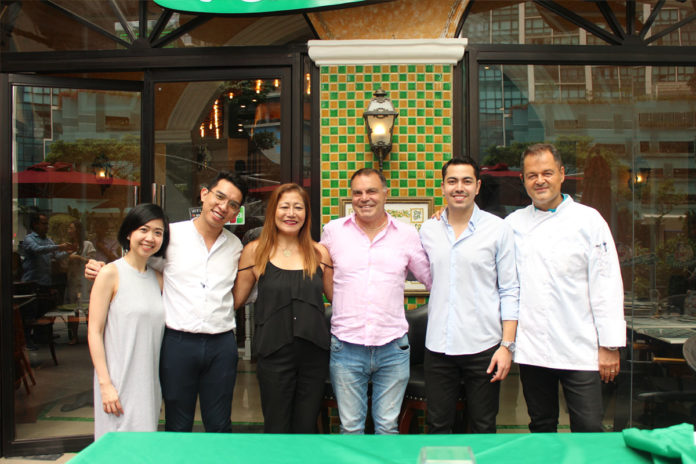 Food Finds Asia | Eat Like a Roman at Mamma Mia | The Italian culinary legacy showcases the best dishes that are made with few ingredients but are big in flavor. Each of the 20 Italian regions boasts of its own signature dishes that are distinct and different from each other. In the Lazio region, the capital city of Rome is known for its cuisine to be cooked with simple techniques that highlight the products of the season.

Mamma Mia restaurant, the home of authentic Italian cuisine, brings in the flavors of Rome by serving popular pasta dishes, based on its iconic cheese called Pecorino Romano: Bucatini All Amatriciana, Trippa Alla Romana, Rigatoni con Salsiccie, and Bucatini Alla Norcina.  And no less than a chef straight from Rome will prepare and serve these dishes to the diners of Mamma Mia.

Chef Alessandro Carosi, a native of Rome, built his culinary career by studying in the Instituto Alberghiero and working in many restaurants, including three of his own, in Italy.  He specializes in Italian cuisine and takes special pride in making the best pizza, considered to be the most widely consumed food in Rome.

In Mamma Mia, Chef Carosi started by introducing a pizza dough that is proven to be lighter and softer to the bite. “We now use the special wheat flour from Napoli, then we let the dough rest for 24 to 36 hours,” reveals Chef Carosi. With an improved dough texture, pizza lovers can expect more pronounced flavors coming from the toppings.

To create the pasta dishes that are considered to be staples in Rome, this Roman chef also brings with him one important ingredient: the Pecorino Romano.

Made from sheep’s milk, the Pecorino Romano is one of the most popular cheeses in Italy. It’s made up of 100 percent sheep milk produced in Lazio, the province of Grosseto in Tuscany, and in Sardinia Island. As one of the most popular cheeses in Italy, the Pecorino Romano has protected designation of origin (PDO) status and continues to be made using only traditional methods in its areas of origin.  It has a salty flavor that is intense, savory and with notes of milk that is ideal for grating and flavoring pasta dishes. The Pecorino Romano hard cheese is crumbly and covered with a white, thin and smooth rind while the Black Pepper Pecorino has a thick layer of ground black pepper as its crust.

“I’m proud to say that you can only find an authentic Pecorino Romano cheese wheel here at Mamma Mia. We are really big on good, quality ingredients for our dishes just to make sure we serve the real flavors of Italian dishes. We are also big on servings so that our diners can share food with each other whether they are family members, friends, or colleagues. Of course, we are also big on service because our staff and crew make sure all clients are attended to with warm hospitality.

That is what Mamma Mia is all about, the motherly warmth and comfort of home, as diners savor the great Italian food just like in Italy.

This March, we are featuring the flavors of Rome and we have Chef Carosi to man the kitchen.

For starters, we have pizza, pasta, and Pecorino Romano cheese to initiate Filipino diners to the flavors of Rome. We also added other new menu items as well such as Cappelletti al Forno, Cappelleti in Brodo, Pappardelle Con Gamberi E Calamari, and Trippa Alla Romana. In the following weeks, we will continue to add more dishes from our cucina romana,” says says Giulius S. Iapino, chief executive and president of Rigatoni Corporation Eatalian Incorporated., the mother company of Mamma Mia.  Rigatoni Corporation Eatalian Incorporated also owns other popular Italian restaurants such as Parmigiano Ristorante Pizzeria in Molito Commercial Complex in Alabang, and Parmigiano Ristorante Pizzeria at Newport Mall, Newport Blvd, Pasay.  They also own Toni & Sergio, at Venice Grand Canal Mall in Taguig City and another branch of Toni & Sergio at Eastwood Mall in Bagumbayan, Quezon City.

Savor the flavors of Rome and eat like the Romans do at Mamma Mia.

ABOUT US
FoodFindsAsia.com is a collation of content to help grow your food business. If you're a foodie, you'll find tons of resources for you here, too. Should you want to contribute content, drop us an email.
Contact us: email@foodfindsasia.com
FOLLOW US
Copyright © Heartshaper Asia. All Rights Reserved 2016.
MORE STORIES
Drink

3 Components of a Memorable Graduation Party

Why JET Hotel Lipa’s Hub & Spoke is your next culinary...

How to Ease Into a Vegan Lifestyle