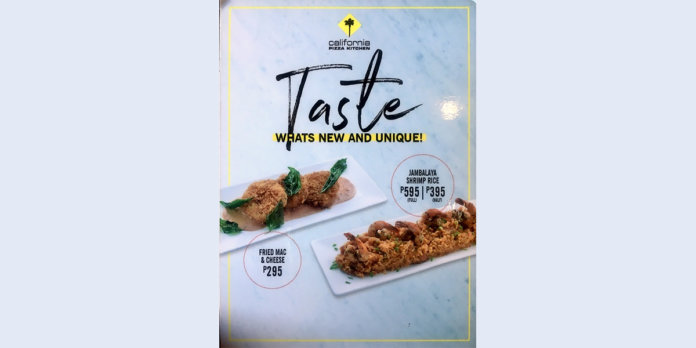 California Pizza Kitchen (CPK) commemorated its 20th anniversary by adding 14 varieties of dishes, along with the return of six trademark pizzas at Shangri-La Mall, in Mandaluyong last Nov 15.

The new menu is only available at Philippine CPK branches and will be available to the public starting Nov. 26 or first week of December.

“We have a lot of regular customers of course at CPK. So I’m sure they want to try something new,” Vallar said.

“We are reintroducing the most popular pizzas of the past 20 years,” Vallar added. “The old pizza favorites we’re bringing back, with of course the nostalgia aspect of it.”

Two new salads are California Harvest Salad, and the Golden Pear Salad, while the three

The two new desserts are Banoffee Pie, and the Nutella Cheescake.

CPK plans to make the new menu available until May or June next year, with the most popular dish that can capture the public’s taste remaining.

“We’re keeping it on the menu until we roll out the new menu until May or June next year, and the popular ones will definitely remain,” Vallar said.

How to Survive the Restaurant War [EVENT]