Home Asian Food Can I make my favourite meals in an Instant Pot? 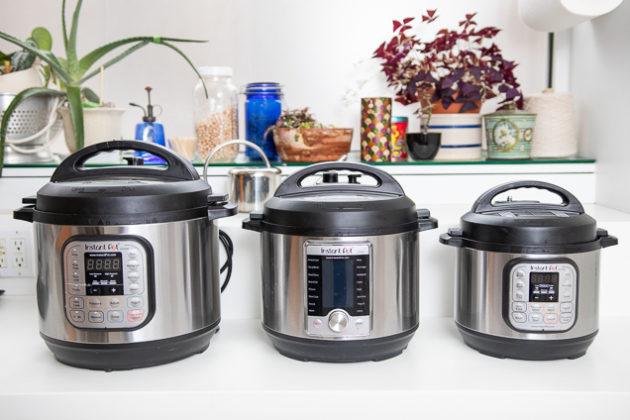 FoodfindsAsia.com | Can I make my favourite meals in an Instant Pot? | Instant Pots are becoming a common sight in many kitchens as their popularity grows but are they just a fad or really a must have gadget?

To the unaware, an Instant Pot is to all intents and purposes a pressure cooker. These style cookers have been around for over 320 years and their popularity has dipped and waned during this time. They became popular during the second World War as a way to speed up the family dinner. At this time many women were working in factories to aid the war effort and found it difficult to provide nutritious meals quickly for their families. The pressure cooker providing a way to make fast and tasty meals and reduce energy usage at the same time.

After the war the manufacture of these cookers dipped due to a lack of materials but they came back in the 1950’s and since then have been readily available from any department store’s cookware section.

What is the difference between a pressure cooker and an Instant Pot?

An Instant Pot works the same way as a pressure cooker but has more features. To cook your food you put the ingredients inside and any liquid needed and then seal and lock the unit. Once you have selected your settings the temperature rises inside and starts to create steam. After about 4 minutes the correct pressure will be reached and the cooking process begins. Due to the way it cooks under pressure meals are made much faster than other cooking methods. It can cut your cooking times by 65%-70% in many cases. This saves you money and time.

What sort of food can you cook in an Instant Pot?

Like a pressure cooker or conventional oven it is quite versatile in what it can cook. It has a range of features including saute but generally everything you cook is steamed. This means food you cook comes out moist and juicy. This is good for some food and not so good for others. For instance you can put in tougher or cheaper cuts of meat like brisket or certain pork cuts and cook them in a third of the time you would normally take and they will come out tender and moist. However if you want to cook chicken with crispy skin you would need to finish it under the grill to crisp it up which starts to take away some of the time saving benefits of using the Instant Pot.

What can’t I do in an Instant Pot?

There are a few things that don’t come out well in an Instant Pot. The first is chicken or anything you want to be crispy. The meat will come out moist but if you want that authentic fried chicken with crispy skin and moist meat then you will be disappointed. Pies do not fare well in the cooker either ending up with floppy pastry instead of a lovely flaky texture. Steaks and burgers are better done by another method. They can be cooked in an Instant Pot but they won’t develop that sear on the outside that you like and also there is no time gain to be made. Dairy based sauces are best left alone too although there are some recipes on the internet for mac and cheese and other dishes.

What about my favourite meals?

It would be impossible to list everything you can cook in an Instant Pot but a basic list of meals and snacks you can cook well would be rice, eggs of any style, pulled pork, soups, stews, whole frozen chicken (finished under broiler if required), chili con carne and baked potatoes. Soups and stews are especially suited as they can be cooked either fast under pressure or the slow cooker option can be set. There is a good chance your favourite food can be done in an Instant Pot. There are plenty of snack options too like Instant Pot peanuts.

What are the advantages and disadvantages of using one of these cookers?

Like anything there are pros and cons and the Instant Pot is no exception.

One of the pros is that it saves time and money. Because of the cooking method it cuts the cooking time dramatically freeing you up to do other things and this also means it is using less electricity which helps the utility bills. Due to the way it tenderises meat you can buy cheaper cuts of meat and reduce your shopping bill. Because it cooks quickly it is convenient and may reduce the temptation to get food delivered saving money.

It retains more vitamins and other nutrients than some other ways of cooking such as steaming and boiling and it also renders food more easily digestible. It doesn’t take up too much space and it is eco friendly. It only heats for about 40% of the cooking time meaning no energy is lost and due to the design all the heat is contained inside with minimal loss. The outside remains cool rising to lukewarm at most.

The cons include the price. If you have a family you will need to buy a larger pot and if you want an air fryer attachment then this will increase the cost even further. The inner cooking pot is stainless steel and easily cleaned however the bulky pot itself might be more awkward to clean. It cannot crips bacon or chicken skin. It cannot fry or deep fry although it has a saute feature. You can’t bake cakes the same way that a conventional oven does. There will be no crust however it does make very moist bread pudding and other desserts.

Whether the pot can cook your favourite meal is totally dependent on what food you like. If you are a big barbecue fan or love fried chicken then the answer is a resounding no, however if you love chili con carne or noodle soup then it may suit your needs. If thinking of getting one you should search the internet for the many recipes out there and see if your favourite dishes are included before making a decision.

How to Choose Fresh Seafood and Fish?