The New York-based burger chain raised $105 million in its initial public offering Thursday evening, selling 5 million shares at $21 apiece. That price easily topped the most-recently planned $17-$19 range, itself an increase from the $14-$16 range in the company’s initial filing, but given the opening double it’s clear the restaurant chain could have been even more aggressive on pricing. With underwriters holding an option to buy another 750,000 shares, the total deal proceeds are likely to rise above $120 million. At its IPO price, Shake Shack carried a $745 million valuation.

Friday morning’s impressive debut boosted the fortune of founder and Chairman Danny Meyer. The restaurateur, who owns 21% of the company, or about 7.4 million shares, saw his stake, worth $156 million at the offering price, swell to more than $350 million. Other shareholders reaping the benefits Friday: private equity firm Leonard Green, Select Equity Group, Alliance Consumer Growth, Jeff Flug – a Shake Shack board member who serves as president of Union Square Hospitality Group, the parent company of Meyer’s other restaurant ventures — and CEO Randy Garutti.

Shake Shack’s offering is the latest from a small, fast-growing restaurant chain aiming to grab market share in a crowded industry, and its opening surge should come as little surprise.

According to data provider Ipreo, each of the 11 restaurant operators to come public since the start of 2012 has ended its first day in positive territory. In fact, only one of those chains – Ignite Restaurant Group , which operates Joe’s Crab Shack and Romano’s Macaroni Grill — currently trades below its offer price.

The rest of the group has had varying degrees of success. Potbelly is up less than 2% from its offer price, but IPO buyers had their chance to exit with profits after the stock popped 120% on its first day of trading.

Better long-term bets thus far have included Outback Steakhouse parent Bloomin’ Brands (up 131% from its offer price), Zoe’s Kitchen (up 111%), Dave & Buster’s Entertainment (79%) and El Pollo Loco Holdings (79%). The group at large has gained 55%, to the 48% gain for IPOs across all industries since the start of 2012, according to Ipreo.

Perhaps most relevant to Shake Shack has been the strong after-market performance of fellow burger chain The Habit Restaurants. Habit raised a similar amount of money ($103.5 million) in November 2014 and doubled on day one. But even since retreating from that level the stock has held onto the bulk of its initial gains, posting an 83% after-market return over the last two and a half months.

There a number of reasons why fast-casual restaurant chains have been popular with investors. Tepid economic growth and the high unemployment rate of recent years have households strapped for cash to spend on more elaborate dining, while at the same time consumers are seeking healthier options than the old standbys likeMcDonald’s MCD -0.89%, Wendy’s or Yum! Brands’ KFC. But the bigger from the investment perspective encompasses all of those, and really amounts to “the chase for the next Chipotle.”

Chipotle Mexican Grill CMG -0.66% has made investors a mint since it was spun out of former parent McDonald’s in a 2006 IPO. The traders, fund managers and average investors clamoring for Shake Shack shares Friday no doubt have something like the same in mind. After all, returns like those below can make up for bad taste from a few other portfolio mistakes: 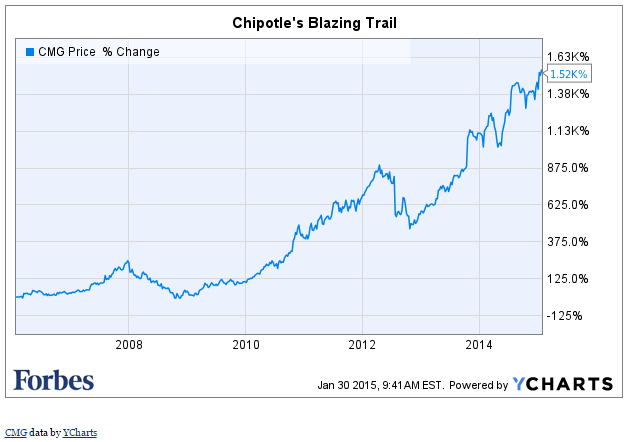 McDonald’s meanwhile, continues to struggle as its rapid international growth has slowed alongside weakness in the U.S. After another disappointing round of quarterly earnings, the Golden Arches announced a change at the top this week as Chief Executive Don Thompson stepped down. Slipping another 1% in the shadow of Shake Shack’s stunning debut Friday is just more insult to injury.

ABOUT US
FoodFindsAsia.com is a collation of content to help grow your food business. If you're a foodie, you'll find tons of resources for you here, too. Should you want to contribute content, drop us an email.
Contact us: email@foodfindsasia.com
FOLLOW US
Copyright © Heartshaper Asia. All Rights Reserved 2016.
MORE STORIES
Your Food Biz

One Way Restaurant — Know Why Trip Advisor Ranks Them Number...

Prospering Over the Long Term